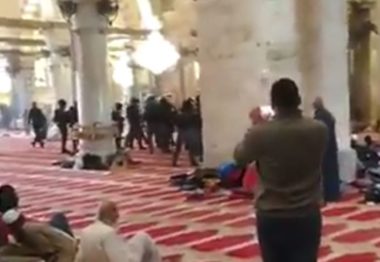 Dozens of Israeli soldiers and police officers invaded, on Sunday morning, the courtyards of the Al-Aqsa Mosque, in occupied East Jerusalem, and attacked the Muslim worshipers, wounding dozens, including one of the civilian guards of the holy site, and detained another.

The soldiers and police were accompanying large groups of illegal colonialist settlers, who were conducting provocative tours in the courtyards of the holy site.

The WAFA Palestinian News Agency has reported that the soldiers and the police stormed the al-Qibli Mosque in Al-Aqsa, desecrating the site with their full military gear, and assaulted many Palestinians while trying to remove them from the holy site.

The police then left the mosque, and the worshipers closed its gates, before dozens gathered in front of it, while chanting and condemning the provocative invasions.

Shortly afterwards, the police attacked and clubbed dozens of worshipers, and tried to remove them to allow more groups of colonists to conduct their tours.

The soldiers also closed Bab al-Asbat and Bab Hotta gates, leading to the holy site, and prevented the Palestinian worshipers from crossing.

Furthermore, the soldiers assaulted and injured one of the guards of Al-Aqsa Mosque, identified as Khalil Tarhouni, causing many cuts and bruises, especially to the head, and prevented the medics from approaching him for more than an hour.

The soldiers also attacked another guard, identified as Essam Najeeb, and summoned him for interrogation at Al-Qashla nearby detention center.

Tension is still mounting due to the extensive military and police presence in the holy site’s compound, especially as more groups of colonists are preparing to invade and tour it, marking the so-called “Jerusalem Day.”

On Saturday evening, the soldiers abducted twenty-six Palestinians, including the secretary of Fateh movement in Jerusalem, and moved them to several detention and interrogation facilities in the city.