Army Abducts Two Palestinians In Hebron, One In Jenin 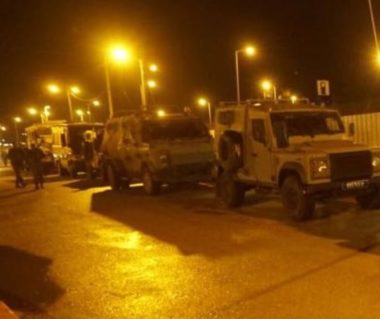 Israeli soldiers abducted, earlier Sunday, two Palestinians, including a teenage boy, in Hebron, in the southern part of the occupied West Bank, and one near Jenin, in northern West Bank.

The Hebron office of the Palestinian Prisoners’ Society (PPS) said the army abducted Ya’coub Yahia Rajabi, 20, from his home in the city, after the soldiers invaded and violently searched it.

It added that the soldiers also abducted Firas Emad Hdeib, 17, from his home in the al-‘Arroub refugee camp, north of Hebron, after ransacking the property.

Furthermore, the soldiers invaded Kharsa town, south of Hebron, before storming and violently searching homes, including the home of a former political prisoner, identified as Abdul-Majid Shadeed, and property of the imprisoned Anas Shadeed.

In Jenin governorate, in northern West Bank, the soldiers abducted Osama Ibrahim al-Husseini, 30, from Faqqu’a village, east of Jenin city, while heading back home after prayers in the Al-Aqsa Mosque, in occupied Jerusalem.

In related news, dozens of Israeli soldiers and police officers invaded the courtyards of the Al-Aqsa Mosque, in Jerusalem, and attacked the Muslim worshipers, wounding dozens, including one of the civilian guards of the holy site, and detained another.

On Saturday evening, the soldiers abducted twenty-six Palestinians, including the secretary of Fateh movement, in Jerusalem, and moved them to several detention and interrogation facilities in the city.