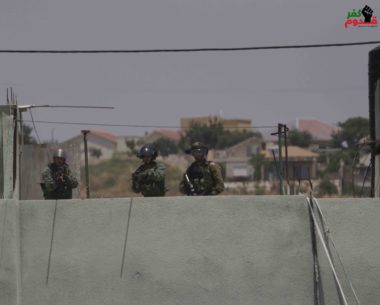 Morad Eshteiwi, the media coordinator of the Popular Resistance Committee in Kufur Qaddoum, said under cover Israeli soldiers infiltrated into the town, and kidnapped Mahmoud Abdul-Qader Eshteiwi, after ambushing him and several other protesters.

He added that the undercover soldiers were hiding in an abandoned building, before ambushing and attacking several protesters.

Many Palestinian youngsters then started throwing stones at the soldiers.

The soldiers also fired many live rounds, rubber-coated steel bullets and gas bombs, mildly wounding five Palestinians, who received the needed treatment by local medics without the need for hospitalization.

On Friday, the soldiers injured four Palestinians in Kufur Qaddoum after the army attacked the protests in the town.

Since 2011, villagers from Kufur Qaddoum and surrounding villages have organized a nonviolent demonstration on Fridays, to object to the illegal Israeli colonies, and to call on the Israeli occupation authorities to reopen the village’s main road, which has been closed by the army since 2002.