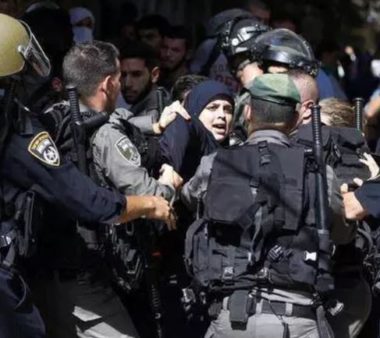 The Palestinian Red Crescent Society (PRCS) said the woman suffered cuts and bruises to several parts of her body, especially her head, and was moved to the al-Makassed Hospital, in Jerusalem.

It added that its medics were called to the scene, and faced numerous difficulties while trying to reach her, especially after the soldiers stopped the ambulance and prevented them from entering the areas surrounding the Old City.

Eyewitnesses said the woman was injured after the soldiers prevented many Palestinians from entering the Al-Aqsa Mosque, and its surrounding areas.

They were taken prisoner after the army prevented dozens of Palestinians fro entering Al-Aqsa, while groups of fanatic colonists, conducted provocative tours in its courtyards.