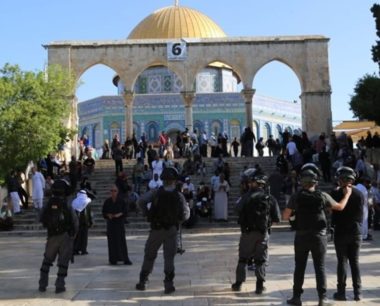 The office of the Palestinian President, Mahmoud Abbas, issued a statement strongly denouncing the ongoing and escalating Israeli violations against the Al-Aqsa Mosque, in occupied East Jerusalem, and the worshipers.

President’s spokesperson, Nabil Abu Rodeina, said the president and the government hold Israel accountable for this serious escalation, especially amidst increasing invasions by illegal colonists, accompanied by soldiers and officers, into the holy site.

He added that Israel is not only allowing and encouraging these violations, but is also escalating its attacks and abductions of Palestinian worshipers in the occupied city, in addition to imposing severe restrictions on those who are allowed into Al-Aqsa.

Abu Rodeina also said that Israel’s serious violations are dragging the entire region into a new wave of violence.

The Palestinian official also warned that, by trying to turn this political conflict into a religious one, Israel is dragging the region into very dire repercussions that would affect everybody, and every country, in the region.

He saluted the steadfastness of the Palestinians despite the latest serious Israeli escalation, the abduction and imprisonment of dozens of Palestinians in the last few days alone, in addition to the dangerously increasing assaults against them.

On its part, the Palestinian government in the West Bank issued a statement condemning the Israeli violations, and accused Tel Aviv of deliberately causing more deterioration to the social and economical conditions in occupied Palestine, including Jerusalem.

It said Israel is trying to pass resolutions that avoid implementing any of the internationally guaranteed rights of the Palestinian people, including their rights to their holy sites, liberation, independence and sovereignty.

It added that what Israel and the United States are doing are direct violations of many treaties, including the Right of Return to the refugees, the right to establish and independent state with East Jerusalem as its capital, and the right to self-determination.