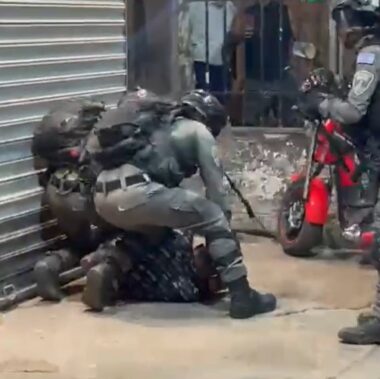 Israeli soldiers assaulted, on Saturday night, several Palestinians, especially young men, and abducted some of them in Silwan, the Old City, al-Misrara, and many other areas in occupied Jerusalem, and forced the shops to close, to allow illegal colonialist settlers to hold provocative marches.

Dozens of soldiers invaded the al-Misrara area, in Bab al-‘Amoud, and assaulted several Palestinians, including shop owners who were also forced to close their stores, ahead of the provocative march of scores of illegal colonialist Israeli settlers, the Wadi Hilweh Information Center in Silwan (Silwanic) has reported.

Silwanic added that many soldiers also assaulted a young man in Sultan Suleiman Street, before abducting him. The soldiers also closed all roads surrounding the Old City of the occupied Palestinian capital, Jerusalem, and prevented the Palestinians from reaching their homes, while the fanatic Israeli colonists roamed the streets while chanting racist slogans.

The Palestinians were in the streets, shopping and eating, and just socializing with each other on the even of the Al-Adha Muslim feast.

The soldiers also invaded and ransacked several Palestinian homes, including the home of Midhat al-Isawi who was just released from Israeli prisons, to prevent his family from celebrating his release.