Israeli Soldiers Attack And Abduct A Child In Kufur Qaddoum 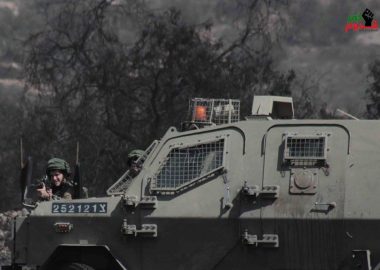 Israeli soldiers abducted, Saturday, a Palestinian child after attacking him, in Kufur Qaddoum town, east of the northern West Bank city of Qalqilia.

Morad Eshteiwi, the media coordinator of the Popular Committee against the Annexation Wall and Colonies in Kufur Qaddoum, said the soldiers attacked a child, identified as Hamza Mustafa, 15, and abducted him.

He added that the soldiers also chased many young men in the Palestinian orchards but were unable to abduct any o them.

The Palestinians, accompanied by international peace activists, have been holding weekly processions against the illegal Israeli colonies and the Annexation Wall, and demanding the army to reopen the town’s main road, which was blockaded fifteen years ago, to enable easy access for colonialist settlers driving to and from Kedumim colony, which was built on private Palestinian lands.

The town is subject to constant Israeli military invasions, including breaking into homes and violently searching them, in addition to abductions of its residents and activists.