Israeli Soldiers Attack Funeral Of An Elderly Woman In Jerusalem 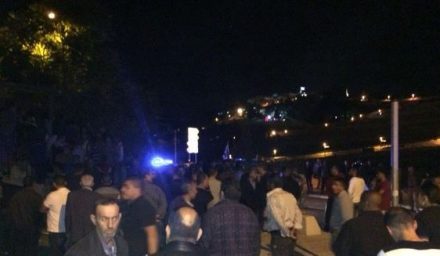 Israeli soldiers attacked, on Wednesday evening, the funeral ceremony of an elderly Palestinian woman, east of the Al-Aqsa Mosque, in occupied Jerusalem, as the mourners were heading towards the graveyard in Silwan town.

The Wadi Hilweh Information Center in Silwan (Silwanic) has reported that the soldiers attacked the funeral of Jamila Ibrahim al-A’war, 89, from Ein al-Louza neighborhood in Silwan, just as the mourners reached Bab ar-Rahma graveyard, adjacent to the eastern wall of Al-Aqsa Mosque, after conducting prayers in Ein al-Louza mosque.

Silwanic said that the army surrounded the graveyard, and when the Palestinians reached there to conduct burial ceremonies, the soldiers started insulting them and assaulted several Palestinians with batons, before throwing concussion grenades, and gas bombs on them, causing many injuries.

The soldiers removed the Palestinians from the graveyard, and alleged that it is located on a confiscated land that the Palestinians are not allowed to use, before closing its gate, and assaulted many of them.

Nearly 30 minutes later, the soldiers allowed a few Palestinians to enter the graveyard to bury the deceased woman, while dozens of residents stayed on the main street. This came after an army officer checked the issue with his superiors, who told him that “the location of the grave is not within the confiscated area.”

Two weeks ago, the soldiers attacked the funeral procession of Jamal Mohammad al-‘Abbassi, in the same graveyard, causing dozens to suffer the effects of tear gas inhalation, and many others suffered cuts and bruises.