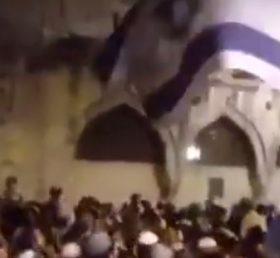 The Palestinian News & Info Agency (WAFA) said the soldiers attacked the two Palestinians, and took them to an interrogation center in the city.

It added that dozens of fanatic Israeli settlers marched in Bab al-‘Amoud (Damascus Gate) area, while chanting racist slogans, including “death to Arabs,” an issue that led to clashes with many young Palestinians.

On Wednesday evening, the soldiers attacked the funeral ceremony of an elderly Palestinian woman, east of the Al-Aqsa Mosque, in occupied Jerusalem, as the mourners were heading towards the graveyard in Silwan town.