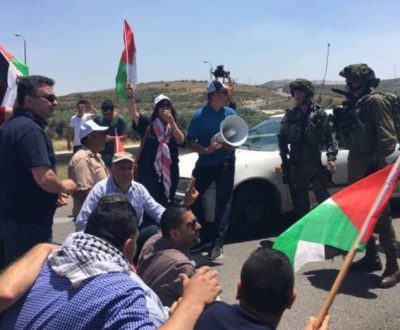 The procession was held in the eastern part of Nablus city, on the main road between Nablus and Tulkarem.

The soldiers assaulted many nonviolent protesters, before abducting Dr. Sami Daghlas, and journalist Ja’far Eshteyya, and took them to an unknown destination.

They also assaulted several protesters with batons, and fired gas bombs, causing many to suffer the severe effects of teargas inhalation.

On Tuesday at dawn, the soldiers invaded and searched many homes, in various parts of the occupied West Bank, and abducted at least seventeen Palestinians.