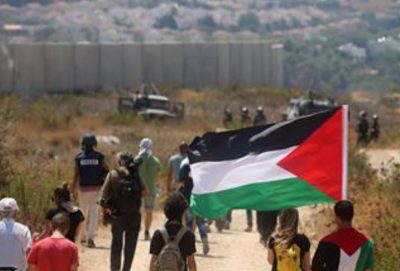 Just as the protesters reached close to the fence that separates the village from the Oder Israeli military base and detention center, the soldiers started firing dozens of gas bombs at them, causing many to suffer the severe effects of teargas inhalation.

The procession was organized by Palestinian factions and various social and human rights groups, as part of ongoing activities in solidarity with the hunger striking Palestinian detainees in Israeli prisons, who started their strike five days ago, demanding basic human rights, rights guaranteed by International Law and all related resolutions and treaties.

Qaddoura Fares, the head of the Palestinian Prisoners’ Society (PPS) stated during a speech during the procession that it was held near Ofer Israeli prison to send a message of support and solidarity with the detainees, facing ongoing and escalating Israeli violations.

On his part, Dr. Mustafa Barghouthi, the head of the Palestinian National Initiative, stated that the detainees, including detained leaders Marwan Barghouthi and Ahmad Sa’adat, are risking their lives for the freedom and dignity of their people.

Dr. Barghouthi also called for ongoing popular resistance against the occupation in every part of occupied Palestine, and for supporting the movement of Boycott, Divestments and Sanctions (BDS) in every part of the world, to force Israel to end its violations.

Lawyer Fadwa Barghouthi, the wife of Marwan Barghouthi, said that Israel launched an extensive campaign of abuse and violations against the detainees since the first day of the hunger strike, and started transferring detained leaders and figures to various prisons, in addition to forcing many in solitary confinement, in an attempt to end the strike, but was faced by the strong will and determination of the detainees, while more are also gradually joining the strike.

She added that Israel is also denying the striking detainees their basic rights, including visits with their own lawyers.