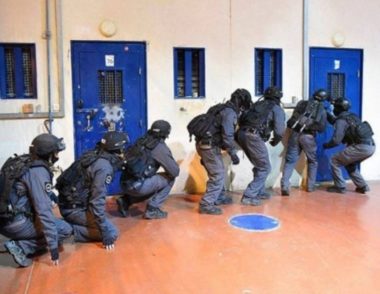 Soldiers of the Metzada special forces unit of the “Israeli Prison Service” attacked, on Wednesday at noon, many Palestinian detainees in their rooms, in Asqalan (Ashkelon) Prison, and destroyed their belongings.

The Palestinian Detainees’ Committee has reported that the soldiers attacked the detainees while eating their lunch, and deliberately spilled their food on the ground, after preventing them from eating.

It added that the soldiers also invaded the detainees’ rooms, and violently searching their belongings, causing damage.

The attack is the second in Asqalan prison in less than 24 hours after the soldiers, of Masada Special Forces of the Prison Service, attacked the detainees, while violently searching them and their rooms.

The Detainees’ Committee said the ongoing invasions and violations against the detainees are causing further tension and accused the Israeli Prison Service and its special forces of attempting to escalate the situation to impose more sanctions, including forcing many in solitary confinement and denying them the right to visits with their lawyers or families.