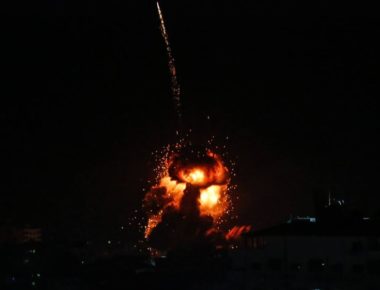 The Israeli Air Force fired, on Thursday at dawn, several missiles targeting a few areas in the besieged Gaza Strip, causing damage, after the army alleged a rocket was fired from Gaza.

Media sources said the Israeli missiles struck several sites, run by the Al-Qassam Brigades, the armed wing of Hamas, in the northern part of the Gaza Strip.

The missiles caused damage to the targeted areas, but did not lead to casualties, the sources added.

The Israeli army claimed that fighters of the Al-Quds Brigades, the armed wing of the Islamic Jihad, fired a rocket, on Monday evening, and added that it exploded off the coast.

Initially, Israel claimed that the alleged rocket was fired as a test, by members of al-Qassam Brigades, the armed wing of Hamas, and apparently landed in water.

Senior leaders of both Hamas and the Islamic Jihad denied any relation to the reported rocket fire, and said that they aren’t interested in escalation in the region.

However, the Israeli army said Hamas, as the movement that “controls” the Gaza Strip, is responsible for any escalation even if it wasn’t behind any firing of shells, and added that Hamas is also accountable for flammable balloons launched from the coastal region.