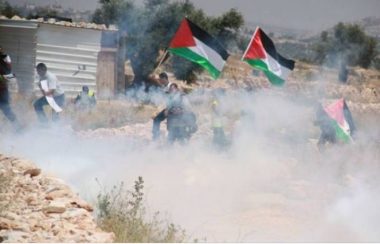 Israeli soldiers attacked, Thursday, many Palestinians, who were planting olive trees in Beita village, south of the northern West Bank city of Nablus, and injured many of them.

Fuad Ma‚Äôali, the head of Beita Local Council, said the soldiers resorted to the excessive use of force against the Palestinians, and fired many gas bombs and concussion grenades at them.

He added that dozens of residents suffered the effects of teargas inhalation, and received the needed treatment by local medics.

The official stated that the Palestinians were planting olive trees in their lands, which the army has been trying to illegally confiscate from them.

‚ÄúAs the Palestinians were planting olive trees, the soldiers attacked them, and fired many gas bombs and concussion grenades, causing dozens to suffer the effects of teargas inhalation,” he added, ‚ÄúWe will continue to reject and counter Israel‚Äôs illegal colonist activities, and will defend our lands.

By planting olive trees, the Palestinians were also rejecting and countering the illegal Israeli efforts to install a colonialist outpost on lands owned by residents from Beita, Qabalan and Yitma villages, south of Nablus.