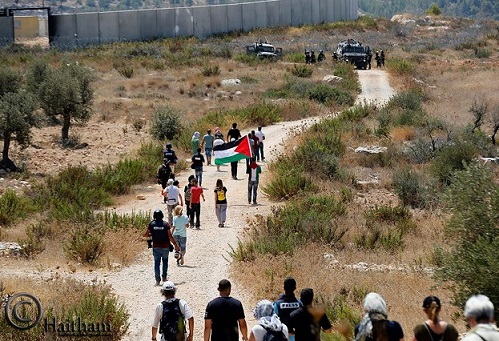 Israeli soldiers assaulted, Friday, the weekly nonviolent protest against the Annexation Wall and Colonies, in Bil’in village, near the central West Bank city of Ramallah, as the locals, Israeli and international peace activists marched towards the villager’s orchards.

They marched towards the villagers’ orchards while chanting against the escalating Israeli violations, for national unity and ongoing resistance until freedom and independence, and the liberation of all detainees.

Israeli soldiers closed the entire area, and assaulted the protesters, preventing them from advancing towards the orchards and the Wall.

Abdullah Abu Rahma, the coordinator of the Popular Committee in Bil’in, called for ongoing protests and resistance against the “racist and extremist Israeli government that continues to target the civilians, and continues to open fire on them, demolish their homes and illegally confiscate their lands in order to build and expand its illegal colonies.”

He also denounced the escalating Israeli violations against the political prisoners, especially those holding hunger strikes, in addition to the repeated assaults against their families.