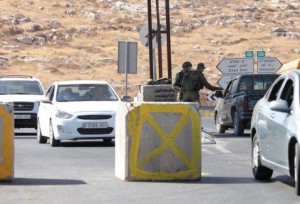 Israeli forces conducted 68 incursions into Palestinian communities in the West Bank and 5 in Jerusalem. 73 civilians, including 5 children, a woman and a Hamas leader, were abducted. 29 of them, including 3 children and a woman, were abducted in occupied Jerusalem.

In the West Bank, on 16 August 2016, in new excessive use of force, Israeli forces killed Mohammed Yousif Abu Hashhash (19) when they moved into al-Fawar refugee camp, south of Hebron. The aforementioned civilian was killed when the Israeli soldiers opened fire at him from a distance of 40 meters through a hole caused by the soldiers in the wall of a house belonging to Bajes al-Hmouz. The aforementioned was on his way out from a residential building where his uncles and grandmother live. The bullet entered under his left armpit and settled in his body. As a result, he was taken to the Palestine Red Crescent Society (PRCS) in the camp and was given first aid and CPR. One of the paramedics classified his wound as very serious. Abu Hashhash then passed away as the bullet settled and he suffered internal bleeding. The clashes, which broke out all day between the Palestinian protesters and Israeli forces, resulted in the injury of 32 civilians with live bullets in different parts of their bodies.

Israeli forces continued to target Palestinian fishermen in the Sea. 10 fishermen were abducted and two fishing boats were confiscated in the northern Gaza Strip.

In the Gaza Strip, on 12 August 2016, a Palestinian civilian sustained a live bullet wound to his left foot when dozens of youngsters and children headed to the border area, east of al-Bureij neighbourhood, and threw stones at Israeli soldiers stationed behind the border fence. Israeli forces stationed behind sand barriers in response fired live ammunition and tear gas canisters at them, wounding the aforementioned civilian.

In the context of targeting Palestinian fishermen in the sea, on 11 August 2016, Israeli gunboats stationed off al-Wahah shore, northwest of Beit Lahia in the northern Gaza Strip opened fire twice towards the Palestinian fishing boats sailing within 2 nautical miles. However, neither casualties nor damages to the boats were reported.

On 12 August 2016, the shooting recurred at the Palestinian fishing boats sailing within the same area. During that, the Israeli forces abducted 5 fishermen, including a child, after confiscating their boat.

On 15 August, a similar shooting occurred in the same area resulting in the aabduction of 5 Palestinian fishermen. They were taken to Ashdod Seaport and their boat was confiscated. After questioning them, two of the fishermen were released whole the rest 3 were still under arrest. Moreover, the boat is still in custody. In the two aforementioned shooting incidents, the two fishing boats were sailing within 4 nautical miles.

Israeli forces attacked non-violent demonstrations in both the West Bank and the Gaza Strip this week.

Following the Friday prayer, on 12 August 2016, Palestinian civilians and Israeli and international human rights defenders organized a protest in the center of Kufor Qaddoum village, northeast of Qalqiliya, and then made their way to the eastern entrance of the village in protest against closing that entrance since the beginning of al-Aqsa Intifada with an iron gate. When the protesters approached the entrance, Israeli forces fired live bullets, rubber-coated metal bullets, tear gas canisters and sound bombs at them. As a result, many civilians suffered tear gas inhalation and the main water line and electrical transformer were damaged due to spraying wastewater at them. Two gas canisters fell on a house belonging to Tayseer Abed al-Rahim Ishteiwi and at the entrance of Omar Ibin al-Khatab mosque. As a result, many civilians suffered tear gas inhalation as well.

Following the Friday prayer, dozens of Palestinians and Israeli and international human rights defenders organized protests against the annexation wall and settlement activities in Bil’in and Ni’lin villages, west of Ramallah and al-Nabi Saleh village, northwest of the city. The protests were organized in solidarity with prisoner Bilal Kayid, who has been on hunger strike for the 3rd Israeli forces fired sound bombs and tear gas canisters to disperse the protesters. As a result, many civilians suffered tear gas inhalation while others sustained bruises as Israeli soldiers beat them up.

At approximately 15:00, on 12 August 2016, dozens of Palestinian young men headed to the border fence between the Gaza Strip and Israel, east of al-Burij refugee camp, in the central Gaza Strip. They threw stones at Israeli soldiers stationed behind sand barriers. The Israeli soldiers fired live bullets and tear gas canisters at the protesters. As a result, Khalid Taha Mohamed Hijazi (32) was hit with a live bullet to the left leg and then taken to al-Aqsa Hospital in Deir al-Balah to receive medical treatment. Khalid’s wounds were classified as moderate.

Rubber-coated metal bullets are lethal if they hit the head of a victim from a close range.