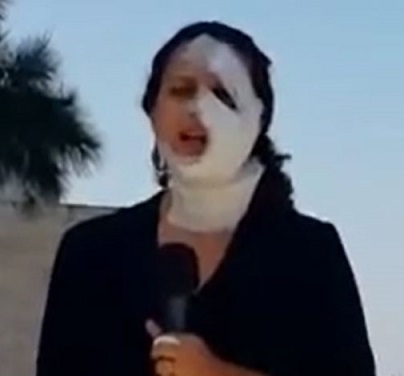 Palestinian Journalist of the Al-Mayadeen News Agency said that the Israeli army investigators closed her case against a soldier who shot her with a concussion grenade in the face, allegedly after being unable “to positively identify him.”

The incident took place on October 4th 2015, in the el-‘Isawiyya town, in occupied Jerusalem, following the death of Fadi Alloun, who was killed by the army.

Journalist Hana’ Mahameed was shot in her face when the soldiers fired at many journalists who gathered in the area.

Mahameed said she will continue to follow her case through lawyers, as the Israeli side is not interested in a serious investigation.

The Israeli Justice Ministry’s Police Investigation Unit (Mahash) claimed it conducted the needed investigations, and that it allegedly examined pictures and videos of the incident, “but was unable to identify the soldier who fired the concussion grenade at her.”

It also claimed that the police and soldiers “acted within regulations, according to the circumstances of the incident, the and did not violate any laws.”

“The decision made by Mahash does not surprise me, we know of countless of cases that were not prosecuted, or even investigated,” Mahameed told the Maan News Agency, “This unit is not independent, and not objective, but it was the only available option for me to file a complaint with.”

Mahameed added that she will stay in contact with specialized lawyers, and will ask Mahash for a copy of its alleged investigation. She also stated that appealing against the decision is part of the process, and is even willing to head to the Supreme Court if needed.

The soldiers invaded al-‘Isawiyya town during morning hours, shortly after Alloun was killed, and surrounded his home, before firing gas bombs and concussion grenades at journalists who gathered in the area.

“Our cars were marked with Press signs, our vests, our helmets, our cameras and even our microphones,” she stated, “My team and I were also near many other journalists clearly visible to the soldiers, and above all, there were no clashes for the army to be firing at.”

After being shot in the face, several young men carried her to a Palestinian ambulance that was stopped at the main entrance of al-‘Isawiyya, and despite her injury, a soldier stopped them, and questioned the wounded journalist.

Israeli daily, Haaretz, said Arab Member of Knesset (MK) Yousef Jabarin of the Unified Arab List, filed a complaint with the Police Investigation Unit, stating the reporter was wearing a press uniform with a reflective bulletproof vest, and a clearly marked helmet.

“There is no way that she, and other journalists, were not targeted, and above all, there was no need for the army to open fire,” Jabarin said, “But the soldiers opened fire, and violated the military’s own regulations.”