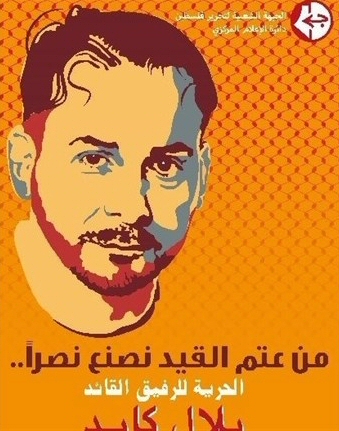 The radio reported on the status of various high-profile prisoners, principally Bilal Kayed, who continued his hunger strike Saturday for the 46th day, which he began after he was transferred to administrative detention — Israel’s controversial policy of detaining primarily Palestinians without charge or trial — the day he was set to be released after completing a 14-year sentence.

The radio informed that Kayed has continued to reject taking any fluids or supplements, and will continue his strike until the administrative detention is removed. Sources said he is in a serious health condition, and has lost over 30 kilograms of weight.

According to the Palestine Prisoners’ Center, Kayed’s health has significantly deteriorated, saying he has lost nearly 90% of his ability to speak, and has become hard of hearing.

The center said in a statement that Kayed has been held in Israel’s Barzilai Medical Center in Ashkelon for days, where he remained handcuffed to his bed despite his bad health conditions.

Also worsened by his hunger strike, were Kayed’s kidney and joint problems which he suffered from before starting his strike, as he was reportedly assaulted and medically neglected during 14-and-a-half years in Israeli prisons.

Meanwhile in Ofer prison, brothers Muhammad and Mahmoud Balboul, who were detained in early June just two months after their 14-year-old sister was detained for allegedly possessing a knife while trying to cross a checkpoint into Jerusalem, continued their hunger strike for the 25th day despite suffering from abuse and recurrent assaults by Israeli soldiers, according to al-Asra radio.

Ibrahim al-Araj, a lawyer for the Palestinian Authority’s Committee of Prisoners’ Affairs, said the brothers’ conditions have worsened, and have started to show very serious signs of exhaustion, fatigue with severe headaches and arthritis.

Al-Araj reiterated that the two brothers, who have each lost more than 20 kilos, continued to refuse taking any vitamins or undergoing lab tests, and that the Israeli Prison Service (IPS) has deprived Mahmoud of the short breaks in the prison yard during the day.

For his part, head of the Palestinian Committee for Prisoners’ Affairs Issa Qaraqe urged human rights groups to intervene in the case of the Balboul brothers and put pressure on Israel to take them to the hospital.

Qaraqe highlighted in a statement that around 100 Palestinian prisoners began solidarity hunger strikes in different Israeli prisons in support of prisoners Bilal Kayed and the Balboul brothers.

Some of the supporters, like Ayyad Hreimi and Malik al-Qadi continued their hunger strike for the sixth day, while other solidarity strikers reached their 15th day on strike.

Qaraqe also noted that along with several other prisoners, Popular Front for the Liberation of Palestine (PFLP) leader Ahmad al-Saadat will launch a hunger strike on Sunday in support of Kayed, who was initially detained in 2002 for alleged involvement in the Abu Ali Mustafa Brigades — the armed wing of the PFLP.

Spokesperson for the Palestine Prisoners’ Center Riyad al-Ashqar added that the IPS has attempted to stop solidarity and support among hunger-striking prisoners using assault as a means of suppression against prisoners, as well as through raiding sections, confiscating personal belongings, electrical appliances, continuous transfers of prisoners, imposing fines, closing sections and preventing prisoners from receiving visits.

A decision by the IPS on Friday to ban Ma’an TV from playing inside Israeli prisons has been highly criticized, with many saying the move was made to disconnect Palestinian prisoners from the outside world and strip them of their rights.

Al-Ashqar called for increased national and international support for the hunger strikers in order to pressure Israel to respond to their demands, and for Israel to end its policy of administrative detention.

According to Addameer, there are currently 7,000 Palestinians held in Israeli prisons, 715 of whom are held under Israel’s policy of administrative detention.