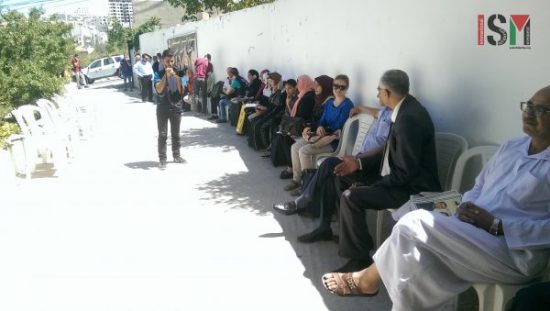 A demonstration in solidarity with hunger striking prisoners, and against the cut of family visits by the International Committee of the Red Cross, was organised by the Hebron Defense Committee in occupied al-Khalil (Hebron) on 28th July 2016.

The sit-in took place at the Red Cross headquarters in al-Khalil, and was attended by locals, press, family members of prisoners, former prisoners, and international solidarity activists. The International Committee of the Red Cross (ICRC) recently announced that they would cut one of the twice-monthly family visits for Palestinian prisoners in the Israeli occupation jails.

The ICRC has been running a family visit program since 1968. With the majority of the Israeli prisons located outside of the West Bank, many families depend on the program by the ICRC to be able to cover the distance, costs and bureaucratic process of being granted a permit for the visit. Additional to these hurdles and obstacles, the ‘normal’ occupation prevents families from reaching their loved ones through road-blocks, closures of whole cities or villages, revocation of permits and the arbitrary denial of passage at checkpoints.

Furthermore, the protest was in solidarity with Palestinian prisoners hunger striking against the practice of ‘administrative detention‘ – detention without charge or trial that can be renewed every six months with little to no discretion by Israeli authorities.

Administrative detention allows the Israeli forces to imprison anyone without even charging them with a crime, making it the perfect tool for an occupying power to lock-up anyone who is considered a dissident or a ‘threat’ – without having to even justify why. This, for the imprisoned and their families, in turn, means that they never know for how long they’ll be imprisoned, as administrative detention can be extended.

Administrative detention, as a tool to illegally and without cause imprison Palestinians – and only Palestinians, not settlers – clearly violates international law.