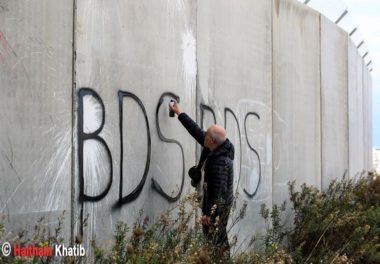 Israeli soldiers attacked, Friday, the weekly nonviolent procession against the Annexation Wall and Colonies, in Bil’in village west of Ramallah in central West Bank, mildly injured a German peace activist, and caused many protesters to suffer the effects of teargas inhalation.

The procession started from the center of the village, heading towards the Annexation Wall in Abu Lemon area, and was attended by many Palestinian, Israel and international peace activists.

The protesters marched carrying Palestinian flags, and chanting for national unity, the liberation of Palestine and the release of all political prisoners.

Some protesters wrote graffiti, such as “we will never surrender,” and “Boycott Israel,” on the gate of the Annexation Wall.

The soldiers used a drone to film the procession, and fired gas bombs and rubber-coated steel bullets. 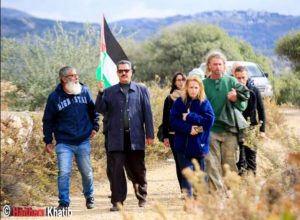 The Popular Committee against the Wall in Bil’in, said a German peace activist was mildly wounded, after the soldiers shot him with a rubber-coated bullet, while several nonviolent protesters suffered the effects of teargas inhalation.

It added that this procession comes in solidarity with all detainees, especially those from Bil’in, including its detained coordinator Abdullah Abu Rahma.

Ahmad Abu Rahma, the media coordinator of the Popular Committee, said the protest started in the village fourteen years ago, and faced ongoing Israeli aggression and escalation, including fatal army attacks, but remained strong and managed to regain 1200 Dunams of lands, that were illegal confiscated and isolated by Israel.