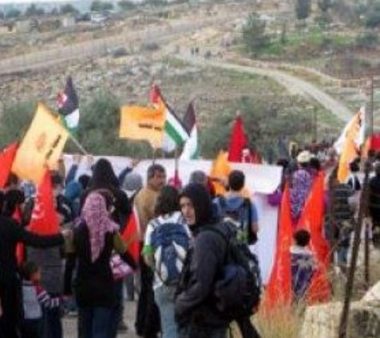 Israeli soldiers attacked, Friday, the weekly nonviolent procession against the Annexation Wall and Colonies in Ni’lin village, near of the central West Bank city of Ramallah.

Mohammad Amira, a member of the Popular Committee against the Annexation Wall and Colonies in Ni’lin, said dozens of protesters marched towards the wall, which separates them from their lands and orchards, while carrying Palestinian flags and chanting for independence.

He added that the protesters carried olive saplings to plant them near the Wall, and called for the liberation of all detainees, including Fateh leader, legislator Marwan Barghouthi, who was abducted by the army on April 15, 2002, and was sentenced to five life terms and additional forty years, in prison.

Amira stated that the procession also marked the thirtieth anniversary of the Israeli assassination of Fateh leader Khalil al-Wazir, in Tunisia.

The soldiers attacked the protesters with gas bombs and concussion grenades, instantly after reaching the gate of the Annexation Wall.

It is worth mentioning that the soldiers also attacked the weekly nonviolent processions in Bil’in nearby village, and Kufur Qaddoum, near the northern West Bank city of Qalqilia.

The soldiers also shot one Palestinian with live fire at the northern entrance of al-Biereh city, in central West Bank.

In Nablus, in northern West Bank, the soldiers shot one Palestinian with live fire, four with rubber-coated steel bullets, and caused six others to suffer the effects of teargas inhalation in kafr Qalil town, south of the city.