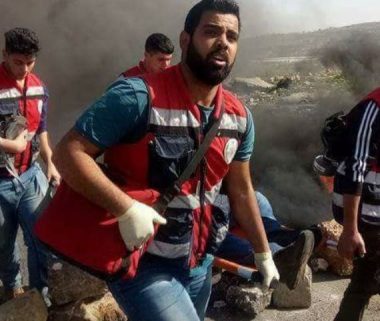 Israeli soldiers injured, Friday, 39 Palestinians, including 13 medics, in al-Biereh city, in the central West Bank governorate of Ramallah and al-Biereh.

Palestinian medical sources said the soldiers resorted to the excessive use of force against the protesters at the northern entrance of al-Biereh city, and shot two Palestinians with live fire, nine with rubber-coated steel bullets, and seventeen who suffered the severe effects of teargas inhalation.

They added that the soldiers injured 13 medics, including some who suffered burns and others who sustained cuts and bruises, after the army assaulted them with gas bombs, concussion grenades, pepper-spray in addition to physically attacking them while trying to provide treatment to wounded Palestinians.

The wounded Palestinians were rushed to Ramallah governmental hospital, while the army also fired many gas bombs at ambulances and medics.