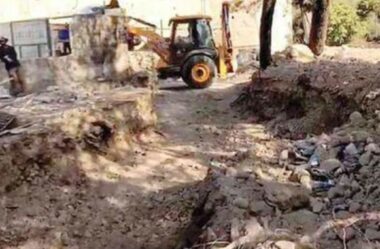 Maan said the soldiers started bulldozing the cemetery, located on 4 Dunams of lands in the al-Khader town, south of Bethlehem, south of the occupied Palestinian capital, Jerusalem, in the West Bank.

It added that the desecration of the ancient cemetery is part of the ongoing expansion work of the segregated colonialist road #60.

The Bethlehem office of the Wall & Colonization Resistance Commission denounced the Israeli violation and stated that it is part of Israel’s war on Palestinian archaeology and history.

It added that this offensive is a serious violation of International Law and constitutes a War Crime against the Palestinian people and their history in occupied Palestine.

It is worth mentioning that Israel started the expansion of segregated road #60 several months ago, and the ongoing violation will also lead to the illegal annexation of thousands of Dunams of Palestinian lands in Bethlehem and Hebron.