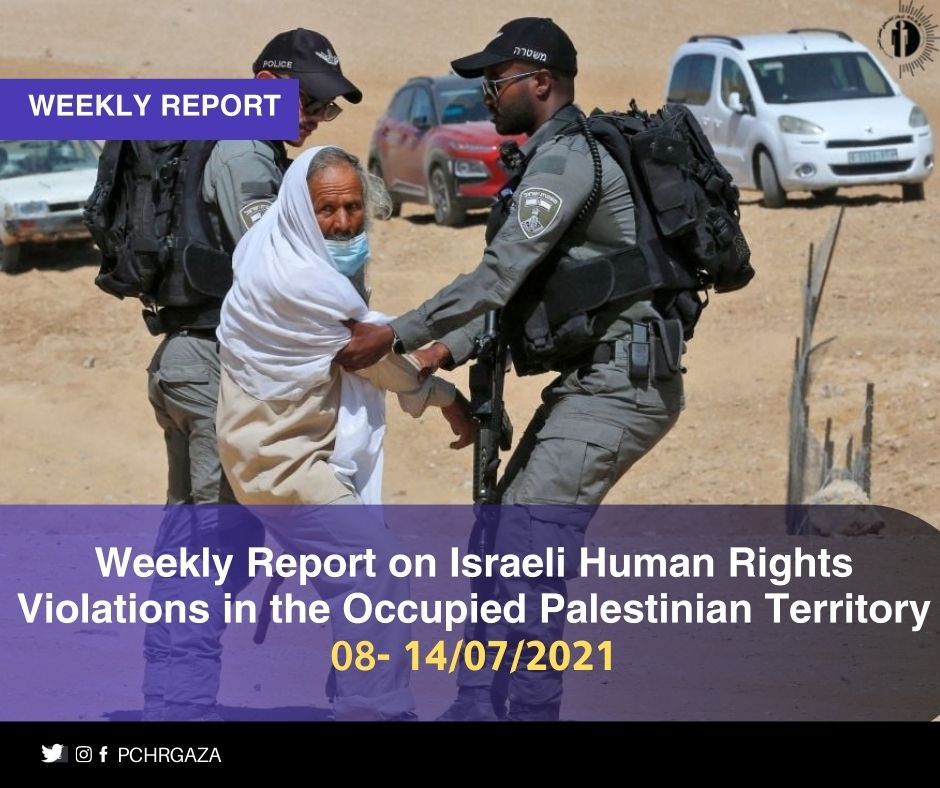 Israeli forces continued to commit crimes and multi-layered violations against Palestinian civilians and their properties, including raids into Palestinian cities that are characterized with excessive use of force, assault, abuse and attacks on civilians, turning the West Bank into isolated blocks of land. Israeli settlement expansion on Palestinian properties and land continued. Meanwhile, the Gaza Strip enters its 15th year under closure, exacerbating the humanitarian hardships across the territory.

Thirteen Palestinians were wounded in excessive use of force by Israeli forces inside the occupied West Bank, including East Jerusalem, including two children and a female: 6 were wounded, including 1 child, in army attacks on a peaceful protest in Sabeih Mount, Nablus; a shepherd was wounded -and arrested afterwards- in Nablus; 5, including 1 child and a female, were wounded during an army incursion into Jenin refugee camp. Another Palestinian sustained critical wounds in Silwan, occupied East Jerusalem. Dozens suffocated due to tear gas inhalation, fired by the army in its attacks in the West Bank.

Israeli forces carried out 126 incursions into the West Bank, including occupied East Jerusalem. Those incursions included raids of civilian houses and shootings, enticing fear among civilians, and attacking many of them. During this week’s incursions, 72 Palestinians were arrested, including 3 children, a woman, a photographer, and a journalist.

In another blatant violations, the army arrested 45 Birzeit University students on Wednesday, 14 July 2021, after ambushing them with a temporary military checkpoint at the entrance to Turmus Ayya village in Ramallah, while returning from a solidarity visit to Palestinian prisoner, Montaser Shalabi, house – which the army demolished on 08 July 2021 in practice of its collective punishment policy against Palestinians. Twelve students were later released, while the others remain in custody to this moment.

In the Gaza Strip, the army arrested 3 Palestinians, including 1 child, while trying to cross the Gaza border fence in eastern Khan Younis. Two were later released, including the child.

Qalqilia: cease-construction notice served against a house (under-construction) and two rooms were demolished in Azzun Atma.

Ramallah: 7 barracks (made with tin-plates) destroyed, including 5 used for residential purposes, 2 for cattle in al-Mughayer.

PCHR fieldworkers reported and documented 3 attacks by Israeli settlers on Palestinian civilians and their properties:

Hebron: Palestinian civilians assaulted and their lands invaded in Yatta.

As part of the occupation collective punishment policy against Palestinians accused of carrying out attacks against soldiers or settlers, on Thursday, 08 July 2021, the army demolished of Montaser Ahmed ‘Ali al-Shalabi’s family house, Shalabi is a Palestinian from Ramallah imprisoned by Israel allegedly for killing a settler and wounding others in an attack earlier this year.

The Israeli authorities continued to impose collective punishments against the people of the Gaza Strip by strictly tightening its closure on the Gaza Strip, which entered its 15th year, without any indication for a solution in the future, depriving the Gaza population from enjoying their economic, social, and cultural rights. This week, the occupation loosened its restrictions on the movement of goods and individuals, which were enforced since the May military aggression on Gaza, expanding the fishing area from 9 to 12 nautical miles, and allowed the export of agricultural and fabric goods to Israel, and the import of some raw materials and medical supplies via Karm Abu Salem crossing. The occupation also announced that journalists working for international media organizations and the Palestinian Ministry of media would be allowed travel via Beit Hanoun crossing, as well as all those with appointments with foreign embassies or have medical training abroad.

Meanwhile, occupation authorities continued to divide the West Bank into separate cantons with key roads blocked by the Israeli occupation since the 2000 Second Intifada -still closed to this date- and with temporary and permanent checkpoints, where civilian movement is restricted, and they are subject to arrest, especially at al-Karama border crossing, alongside the Palestinian-Jordanian border.

Following are the details of the demolished properties: