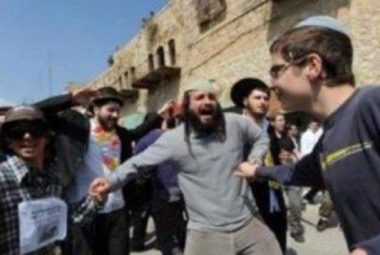 Israeli soldiers closed, Monday, the iron gate which was placed by the army at the entrance of the al-Fawwar refugee camp, and installed roadblocks in several areas in Hebron, in the southern part of the West Bank. Many illegal colonialist settlers attack a home, and its garden, in Hebron city.

Media sources in Hebron said the soldiers closed the iron gate of the al-Fawwar refugee camp, south of the city, and prevented the Palestinians from entering or leaving it.

The soldiers also installed roadblocks at Hebron’s northern road, in addition to Halhoul and Sa’ir towns, before stopping and searching dozens of cars, and interrogated many Palestinians while inspecting their ID cards.

In related news, several colonialist settlers from the illegal Ramat Yishai and Beit Hadassah outposts, hurled stones and trash at a home of a Palestinian, identified as Hani al-Azza, in Tal Romeida neighborhood.

The Israeli assailants also damaged property in the family’s garden, and uprooted their plants.