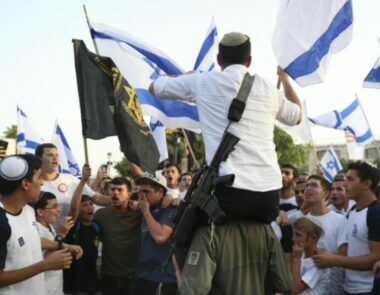 On Saturday evening, Israeli soldiers and colonizers assaulted and injured several Palestinians and attacked many shops before the army abducted two young men in the Bab Az-Zawiya area in Hebron city, in the southern part of the occupied West Bank.

Media sources said dozens of soldiers accompanied a large number of illegal paramilitary colonizers who assaulted many Palestinians, their homes, and shops while visiting an archeological site.

The sources added that the army also closed and isolated the entire area and prevented the Palestinians from entering it, leading to protests.

The soldiers also abducted two young men, Abdullah Abu Aisha and Yousef Abu Aisha while walking near their homes, and took them to an unknown destination.

It is worth mentioning that the illegal colonizers marched in large groups in front of the Ibrahimi Mosque, Shuhada Street, Osama Bin Al-Monqith School, and several other areas in the Old City before attacking homes, shops, and street vendors, leading to protests.