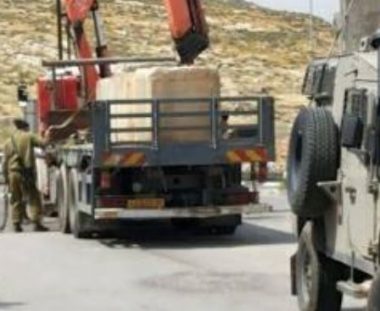 Israeli soldiers imposed, on Monday at dawn, a strict siege, and closed roads with concrete blocks and sand hills, isolating the village of Shuqba and Rantis villages, northeast of Ramallah in the occupied West Bank, and prevented the Palestinians from entering or leaving them.

The soldiers first invaded Rantis village, before breaking into dozens of homes and violently searching then, and imposed a strict siege on it, preventing the residents, including workers, employees and students, from entering or leaving it.

The soldiers also installed a military roadblock on the western entrance of the village, the only road that wasn’t blockaded with sand hills and concrete blocks, and prevented the Palestinians from crossing.

Similar violations took place in Shuqba village, that was also left isolated and blockaded, while the soldiers stopped dozens of Palestinians, and interrogated many Palestinians while inspecting their ID cards.

All workers, including teachers and healthcare professionals, were not allowed to enter or leave the village, especially since many teachers are from nearby villages, an issue that forced all schools, and many business shut.

The Israeli army claimed the closures were enforced after a shooting attack that left one Israeli colonist injured, near ‘Aboud village, northwest of Ramallah.

The soldiers invaded ‘Aboud, and searched homes, before surrounding and isolating it, including placing concrete blocks, and prevented the Palestinians from entering or leaving it.