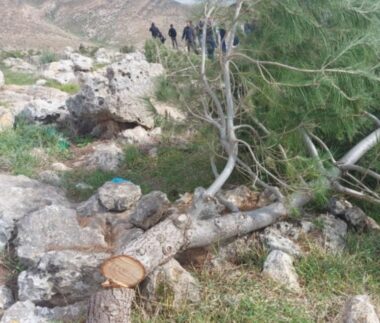 Israeli soldiers invaded, Wednesday, large areas of Palestinian lands, in the West Bank’s Northern Plains of the Jordan Valley in the occupied West Bank, before cutting and uprooting more than 10,000 trees.

Mo’taz Bisharat, the Palestinian Authority official who monitors Israel’s illegal colonialist activities in the Northern Plains, said the soldiers “committed a massacre against 10,000 evergreen trees, and more than 300 olive trees.

Bisharat added that the trees were planted 8 to 10 ago on about 400 Dunams (98.84 Acres) of Palestinian lands, in Einoun forest, as part of a project to plant trees funded by Brazil.

The Israeli attack took place in the morning hours, Wednesday, under the pretext that the trees are in a “military training zone.”

The soldiers isolated the entire area before preventing the Palestinian citizens from reaching them.

Also Wednesday, a group of Israeli colonists, illegally squatting on Palestinian lands, invaded privately-owned farmlands, in the eastern meadows’ area of Bethlehem, and plowed them as part of their constant attempts to confiscate them.

In related news, the soldiers uprooted, on Tuesday and Wednesday, large swaths of Palestinian lands in the southern West Bank governorate of Hebron, to expand an illegal colony, and abducted a man who tried to prevent the army from uprooting his land.

Israel illegally designated many Palestinian areas in the Jordan Valley, Hebron, and other parts of the occupied West Bank, as training zone for the military which used live ammunition, including explosives.

These training drills, conducted by the Israeli occupation army, have led to massive destruction of lands and other property, burning hundreds of dunams of farmlands, in addition to displacing hundreds of Bedouin families, and causing dozens of casualties, including fatalities.