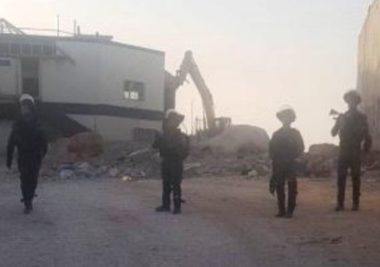 Israeli soldiers invaded, Wednesday, a Palestinian area near the Qalandia Terminal, north of occupied East Jerusalem, and demolished a residential building, in addition to commercial sheds, and injured many Palestinians.

The soldiers attacked many Palestinians during the invasion and demolitions, and fired gas bombs, causing dozens to suffer the effects of teargas inhalation, in addition to shooting one Palestinian with a gas bomb in his back.

The army claims that the buildings were constructed without a permit from the Israeli “Civil Administration Office,” the administrative branch of its illegal occupation of the West Bank.

Media sources in Qalandia said dozens of soldiers invaded the area, while more troops were deployed around the terminal, and its surroundings, before stopping and searching dozens of Palestinians and cars.

They added that the army also delivered demolition orders targeting many residential buildings, including four apartment buildings in al-Matar Street and the main Jerusalem-Ramallah Road, as part of a plan to widen it and impose its full military control over the entire area.