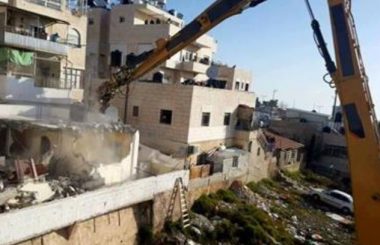 Israeli soldiers invaded, on Monday morning, the village of al-Za’im, in occupied East Jerusalem, and demolished a Palestinian residential building.

The soldiers surrounded the village before many army jeeps, and military bulldozers, invaded it, and demolished the building, owned by Mohammad Awad Sa’iri.

The Israeli army claims that the building was constructed without obtaining a permit from Jerusalem City Council.

Under the Oslo agreements between Israel and the Palestine Liberation Organization (PLO), and the subsequent creation of the Palestinian Authority, the village was designated as part of “Area B” in the West Bank, therefore, construction permits are issued by the local council, which is run by the Palestinian Ministry of Local Government, and not by Jerusalem Municipality.