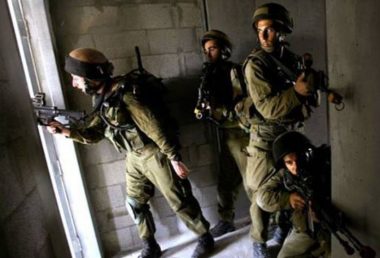 Israeli soldiers abducted, on Monday at dawn, two young Palestinian men, from their homes in occupied East Jerusalem, and took them to detention and interrogation centers in the city.

The soldiers invaded and searched several homes, and abducted Fares Yousef Mkheimar, from his home in Shu’fat refugee camp, and Mostafa Kashour from al-‘Isawiyya town, in Jerusalem.

Both were handcuffed and blindfolded before the soldiers took them to detention and interrogation centers in the city.

Also at dawn, the soldiers abducted eight Palestinians, five of them in Kobar village, northwest of the central West Bank city of Ramallah, and three from ‘Azzoun village, east of Qalqilia, in northern West Bank.