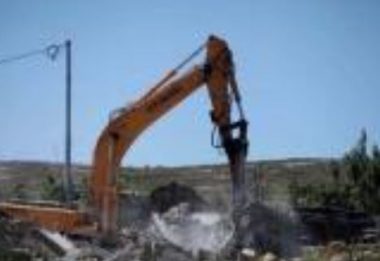 Several Israeli military vehicles invaded, on Thursday at dawn, Barta’a town, southwest of Jenin in the northern part of the occupied West Bank, and demolished a coop, in addition to handing warrants for the destruction of another coop, and an industrial structure.

Tawfiq Kabaha, a member of the Barta’a Local Council, said several army vehicles invaded the village, isolated behind the Israeli Annexation Wall, and demolished a coop owned by a local farmer, identified as Husam Abdullah Kabaha.

He added that the soldiers handed the Palestinian another demolition order targeting his barn, and informing him he has ten days to remove the animals.

Furthermore, the soldiers handed a demolition order to resident Warrad Ma’rouq, targeting his industrial structure, under the allegation of being built without a permit.

Kabaha stated that Barta’a has been subject to extensive invasions and searches of homes, and suffered many demolitions of homes and property over the last several years, in addition to being isolated by the Annexation Wall, and illegal Israeli colonies.

“The residents in Barta’a are living in an open-air prison,” he added, “They are surrounded by the illegal apartheid wall and colonies, and are subject to constant invasions and violations.”

In Gaza, Israeli soldiers stationed on military towers across the border fence, near Erez terminal, in the northern part of the besieged coastal region, fired many live rounds at homes and lands, close to the border fence.