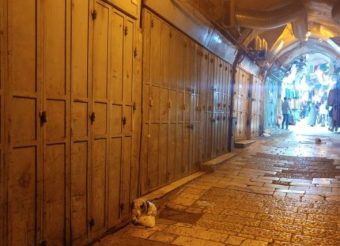 The Wadi Hilweh Information Center in Silwan (Silwanic) said many soldiers, police officers and employees of the tax and revenue department invaded the al-Wad Street area, and started breaking into stores and writing high fines against the owners.

They also abducted three merchants; one of them identified as Ehab Zghayyar, an issue that forced other merchants to close their stores and leave the area.

The invasion led to clashes between many youngsters, who hurled stones at the military vehicles, and the soldiers who fired dozens of gas bombs and rubber-coated steel bullets.

The soldiers also ticketed many drivers, and imposed high fines of them.