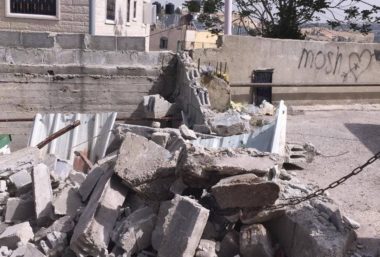 Israeli soldiers demolished, on Monday morning, a garage in Silwan town, south of the Al-Aqsa mosque, in occupied Jerusalem, and handed an order for the demolition of one home, the Wadi Hilweh Information Center in Silwan (Silwanic) has reported.

The soldiers invaded the ath-Thoury neighborhood in Silwan, and demolished a Garage, owned by Kamal Shweiki, reportedly for being built without a permit.

In addition, the soldiers invaded Wadi Qaddoum neighborhood, in Silwan, and handed a warrant to Mohammad Sa’id Salayma to complete the demolition of his home.

Silwanic said the Palestinian had to demolish his property several days ago, after receiving an order from the City Council, for building it without a permit.

Many Palestinians who receive demolition orders are forced to tear down their own homes and property in order to avoid further excessively high fees and fines that they incur when Israel demolishes their homes and bills them for the expenses.