Israeli Soldiers Demolish A Home Near Jenin, Injure Many Palestinians, Including An Infant 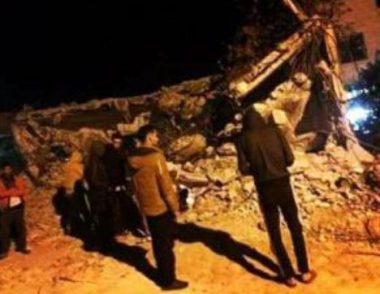 Israeli soldiers invaded, on Friday at dawn, the town of Qabatia, south of the northern West bank city of Jenin, and demolished a home, in addition to causing many Palestinians, including an infant and an elderly woman, in addition to detaining two young men.

Deputy Governor of Jenin, Kamal Abu ar-Rob, said dozens of soldiers invaded Qabatia, before breaking into the family home of detainee Mohammad Ziad Abu ar-Rob, and forced the family out before demolishing the property.

The demolition is an act of collective punishment by the Israeli government against the family of Mohammed, who is currently in Israeli prison charged with killing an Israeli man, identified as Reuven Schmerling, 69, this past October, in Kafr Qassem, where he and another detained Palestinians worked.

The family filed appeals against the demolition of their property, but the Israeli Supreme Court rejected the appeals, allowing the army to proceed with the demolition.

The demolished home was 140 square/meters, where Mohammad’s parent and five siblings resided. The soldiers invaded the property and forced them out before leveling it.

The family was only informed of the date for demolishing their property just one day before the army leveled it.

Following the invasion and home demolition, some Palestinian youngsters hurled stones at the army, while the soldiers fired many live rounds, rubber-coated steel bullets and gas bombs.

The Red Crescent Society said scores of Palestinians, including an infant identified as Badr Naji Abu Zeid, and an elderly woman, Sabeeha Ragheb Abu Zeid, were among many Palestinians who suffered the effects of teargas inhalation.

It added that a young man, identified as Ahmad Arafat Hanaisha, 25, was shot with a rubber-coated steel bullet in his back, and was moved to Khalil Suleiman governmental hospital.

The soldiers also detained Saleh Amjad Loubani and Qussai Mohammad Kamil, and held them at the Salem military base, before releasing them in the morning.