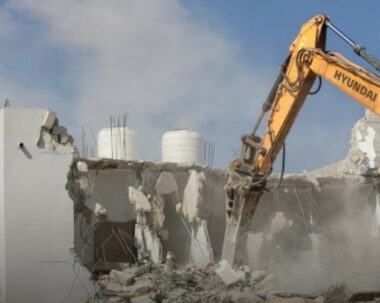 Rateb Jabour, the coordinator of the National and Popular Committees, said several army vehicles, including two bulldozers, invaded the Ma’in community in Yatta town before storming a home and forcing the family out.

Jabour added that the soldiers demolished the 170 square meter home owned by Hamad Issa Mohammad and sheltered him and his family.

The soldiers also invaded the Shu’ab Al-Batim area in Masafer Yatta and demolished four homes, each about 80 square meters.

Furthermore, Jabour confirmed that the demolitions are the fourth in the last two years.

Another Palestinian, Raed Badawi Mohammad, said his lawyer managed to halt the demolition of his home after filing an appeal with an Israeli court.

Israel is planning to demolish many homes and structures in the area and to occupy more Palestinian lands in Yatta and Masafer Yatta, to build and expand its illegal colonies, built in violation of International Law.

The new Israeli government, headed by Benjamin Netanyahu, plans to evict and displace eight out of twenty-eight Palestinian villages in Masafer Yatta to benefit the illegal colonies.

In May of 2022, the Israeli High Court approved the displacement of the eight villages in Masafer Yatta for “being in an area the army uses for live-fire training.”

The twenty-eight communities in Masafer Yatta sit on about 30.000 Dunams of Palestinian lands; however, Israel wants to displace and remove them to build its illegal colonies.

Twenty-three years earlier, the Israeli occupation army presented a plan to displace and remove the Palestinians from twelve communities in Masafer Yatta, to use the lands as training grounds after alleging the lands were not inhabited before 1980; however, the families predate the illegal Israeli occupation.