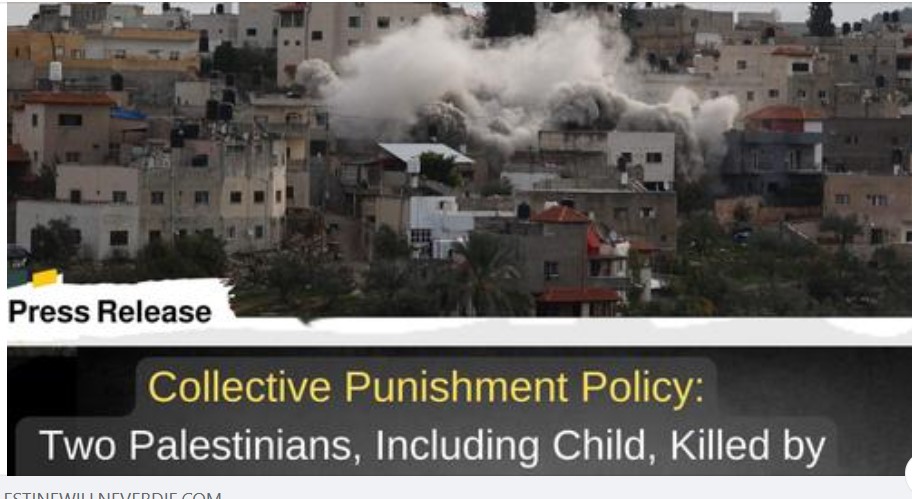 Ref: 1/2023, Date: 02 January 2023, The Palestinian Center For Human Rights (PCHR): Today at dawn, Israeli Occupation Forces (IOF) killed two Palestinians, including a child, and wounded six others during IOF’s incursion into Kafr Dan village in Jenin, north of the West Bank, where they demolished two houses as part of their collective punishment policy against families of Palestinians allegedly accused of carrying out attacks against IOF or settlers.

According to investigations conducted by the Palestinian Centre for Human Rights (PCHR), at approximately 22:30 on Sunday, 01 January 2023, IOF accompanied by a bulldozer, special forces, and Combat Engineering experts, moved into Kafr Dan village, northwest of Jenin.

They surrounded two houses belonging to the families of Ahmed Ayman ‘Abed and ‘Abed al-Rahmen Hani ‘Abed, who IOF killed after allegedly carrying out a shooting at the al-Jalma military checkpoint that killed an Israeli officer on 14 September 2022. IOF also forced the two houses’ residents to leave, and 10 other families living in nearby houses to evacuate amid IOF’s firing of teargas canisters and stun grenades to entice fear among residents and prevent them from approaching. As a result, Palestinians gathered near the two houses and threw stones at IOF, who were deployed around.

Afterwards, violent clashes broke out in the village, where IOF fired live and rubber coated bullets, stun grenades and teargas canisters to disperse the stone-throwers.  As a result, six Palestinians, including two children, were injured; one of the children was identified as Foad Mahmoud Ahmed ‘Abed (17), from Kafr Dan village, who was shot with a live bullet in his abdomen and right thigh. ‘Abed was taken in critical condition to Ibn Sina Hospital in Jenin, where he was pronounced dead at around 02:30 on Monday.

At the beginning of IOF’s incursion into the village, an exchange of fire occurred with members of Palestinian armed groups, wounding Mohammed Samer Hasan Hoshiyeh (22), from Al-Yamun village, with a live bullet in his chest. At dawn, Hoshieh succumbed to his serious injury.

PCHR condemns IOF’s ongoing escalation in the Occupied Palestinian Territory (oPt) and commission of more murders against Palestinians. Also, PCHR denounces the ongoing house demolitions as part of IOF’s collective punishment policy under cover of the Israeli judiciary, in blatant violation of the Fourth Geneva Convention, which prohibits reprisals against protected persons and their property.