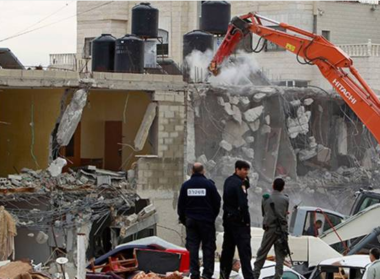 Media sources said dozens of soldiers invaded the area between the industrial zone of the illegal Atarot Israeli colony, which was built on Palestinian lands in Qalandia and Bir Nibala, north of the city, and completely isolated it.

They added that the soldiers then proceeded to demolish a home, owned by members of al-Moghrabi family, under the pretext of being built without a permit.

In some cases, Palestinian families had to demolish their own homes in order to avoid further excessively high fees and fines that they incur when Israel demolishes their homes and bills them for the expenses.