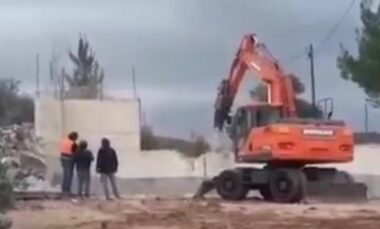 Israeli soldiers demolished, on Thursday morning, a retaining wall in the al-Walaja village, west of Bethlehem, south of occupied Jerusalem, in the West Bank.

Hasan Breijiyya, the head of the Bethlehem office of the Wall & Colonization Resistance Commission, said dozens of soldiers, and employees of the City Council in occupied Jerusalem, invaded the village after surrounding it.

Breijiyya added that the soldiers demolished a retaining wall, owned by Ahmad Ibrahim al-A’raj, on his land in the Ein Jweiza area in the village, allegedly for being built without a permit from the so-called “Civil Administration Office,” the administrative branch of Israel’s illegal occupation.

Last month, the soldiers demolished three homes in the same area, allegedly for being built without permits.

It is worth mentioning that the village, especially the Ein Jweiza area, is subject to serious and ongoing Israeli violations, leading to the demolition of homes and structures, in addition to the destruction of infrastructure and the uprooting of farmlands.

The Israeli violations against al-Walaja started in the 1980s when Israel implemented its plans to annex the Palestinian lands to build its illegal colonies, by denying all construction permits filed by the Palestinians, in addition to dividing the lands, zoning and designating large areas as “green zones,” to prevent the Palestinians from using them, not to mention surrounding them with the illegal Annexation Wall.

Al-Walaja is already surrounded by the illegal colonies on Gilo, Har Gilo, Givat HaMatos, and Har Homa, which were all built on stolen Palestinian lands, in addition to the large areas of lands that were annexed when Israel paved roads leading to these colonies, installing railways, and designating lands as natural reserves, off-limits to the Palestinians.