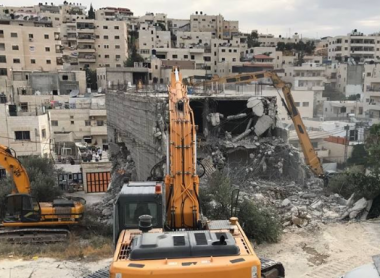 Dozens of Israeli soldiers and police officers invaded, on Tuesday at dawn, the al-‘Isawiyya village, in occupied East Jerusalem, and demolished a four-story apartment building, which also includes two warehouses, that were built by a Palestinian family on their own land.

The Wadi Hilweh Information Center in Silwan (Silwanic) said the soldiers surrounded the building, consisting of six apartments, and two warehouses, and demolished it.

The building, and the warehouses, are owned by members of Mahmoud family in al-‘Isawiyya, and was constructed a year ago, on 800 square meters of land.

The family said that the soldiers previously photographed the building, before the City Council issued an order for demolishing it, under the pretext of being built without a permit.

The family hired a lawyer who was filed appeals against the demolition orders, and started the paperwork to obtain the needed permits for the building.

The case was supposed to be discussed in a hearing that with the local court of the Jerusalem City Council, which was scheduled for today, but the soldiers demolished the building, just hours before the hearing was to take place.