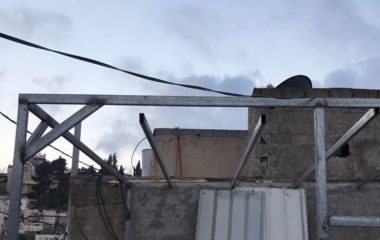 The WAFA Palestinian News Agency has reported that the demolished home is owned by Hasan Yassin Mustafa, and his family.

It added that dozens of soldiers and officers surrounded the entire area, before invading it, and demolished the property. The army claimed the home was being built without a permit.

Israel rarely grants construction permits to Palestinian families, in various parts of occupied East Jerusalem, and its surrounding areas, an issue that forces many Palestinians to build without permits to house their expanding families.

On Sunday, members of Qara’in family in Silwan were forced to demolish their own shed in Silwan, to avoid high fines and fees, after the Jerusalem City Council decided to demolish it.

Umm Ammar Qara’in, the owner of the property, said the family had to demolish its own property, especially since the City Council orders families to pay very high fines, if the municipality demolishes their properties.

The demolished 16 square/meter property was built nearly two years ago, and was constructed with bricks and fortified iron plates.