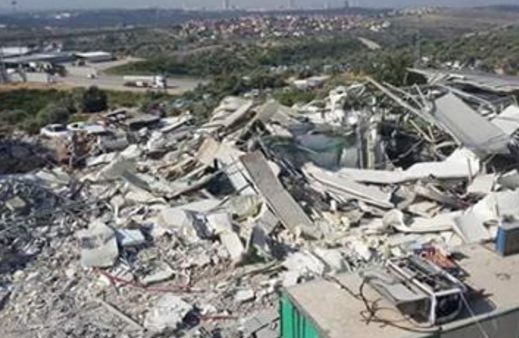 Several Israeli military vehicles and bulldozers invaded, on Thursday at dawn, the village of Ni’lin, west of Ramallah, and demolished an Auto Body shop and a slaughter house, east of the town.

Mohammad Abdul-Qader Amira, the coordinator of the Popular Committee against the Wall and Colonies in Ni’lin, said the soldiers surrounded the area, and demolish an Auto Body shop, owned by Khaled and Yasser Esteih.

In Addition, the soldiers invaded another area in the village, and demolished a chicken slaughter house, owned by Issa Abdul-Ghani Abu Srour,  without any prior notice or warning.

Amira added that the demolished building was located near a military roadblock, and employed 72 Palestinians.

The head of Ni’lin Local C Nader Khawaja said the demolitions were carried out without prior notices, or warnings, and added that the slaughter house was 700 square/meters, with a total cost of more than 1.000.000 Israeli shekels.

Khawaja added that, a few months ago, the army demolished several structures, including car repair shops, a carpentry workshop, in addition to a sanitary supplies shop, in Ni’lin, under the pretext of being built without construction permits.