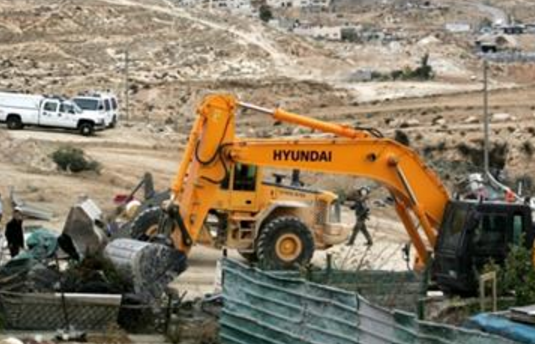 Daghlas added that the soldiers closed the entire area, after declaring it a closed military zone, and prevented the Palestinians from entering or leaving it.

The official also said that this invasion, and demolition, is the fourth in fifty days, adding that the army destroyed more than 500 structures since the beginning of this year.

In addition, Israeli soldiers and dozens of colonizers invaded Nablus city, leading to clashes near “Joseph Tomb” area, east of the city.

Medical sources said one Palestinian was shot in his right leg, after the soldiers fired rubber-coated steel bullets, and gas bombs.  Dozens of residents suffered the effects of teargas inhalation.

The soldiers also invaded al-Jneid area, west of Nablus, leading to clashes between the army and local youths, who hurled stones on the army vehicles.

On Thursday at dawn, the army demolished an Auto Body shop and a slaughter house, east of the Ni’lin town, in the central West Bank district of Ramallah.