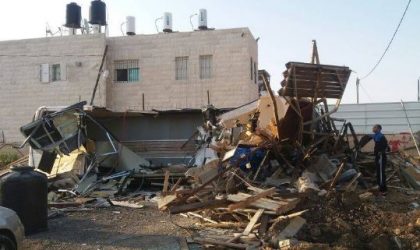 Israeli soldiers and personnel of the Jerusalem City Council demolished, on Tuesday at dawn, a Palestinian car dealership and two sheds in Sur Baher, southeast of occupied East Jerusalem.

The owners of the lands and the dealership were surprised to find signs posted claiming that the area was closed under “Israel’s Lands Authority”. There were also signs declaring the land to be “Israeli State Land,” saying that anyone who enters the area would be violating Israeli law.

The car dealership was owned by a Palestinian identified as Mohammad Oleyyan, who stated that the invasion into his property started at 4:00 in the morning, after the army surrounded the entire area.

The soldiers and police then confiscated most of the contents of the dealership, demolished it and bulldozed the lands surrounding it.

Oleyyan said the demolition took place without a prior warning, and that he built it nearly 18 months ago to provide a livelihood for his six-member family.

“The dealership was 600 square meters, and included a room, toilets and a 30 square meter mobile wooden structure,” he stated, “Under Israeli law, such a structure does not require a construction permit, yet, I filed all the required documents to obtain a permit.”

He also stated that the soldiers confiscated a car and air conditioner, before leveling the structure without allowing him to remove any of its contents.