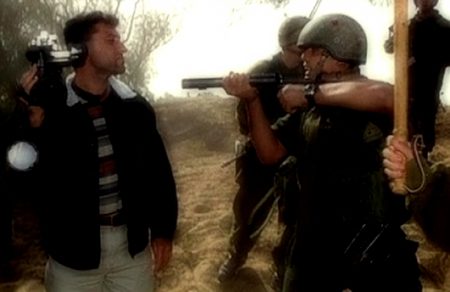 The Palestine News Agency WAFA, on Monday, monitored incitement and racism published in the Israeli media against Palestinians and Arabs between June 15 and 21 July, 2016.

The 296 issue of the report, reviewed a number of articles and op-ed published by Israeli writers and journalists, which incite against Palestinians and Arabs both directly and indirectly.

Maariv newspaper published a racist article on July 7 by Michael Kleiner, in which he attacked Arab member of the Israeli Knesset Hanin Zoabi as a woman and aan Arab and promoted stereotypical ideas about Arabs.

He asked if the 47-year-old Syria-born single woman would have been allowed to apply makeup, leave the house without a head cover, join protests, wave flags or board a Turkish flotilla, establish a career, receive a salary and appear on media outlets if she was still in Syria, or would she be busy taking care of homeless children that she birthed after being forced to marry an old man and fighting with her husband’s younger wife that was recently added to the family?

Kleiner said that Zoabi is lucky that Jews rejected the Uganda plan and returned to their ancestor’s land where they paved roads, built universities in Jerusalem and Haifa and established a western country where Zoabi can were pants, fight for the rights of women and homosexuals and express her extreme and violent ideas under the pretext of freedom of expression.

Kam said, “There is an Arab member in our Knesset who is extremely jealous of Zoabi and he wishes to receive the same media attention that the former receives. His name is Yousef Jabarin. You do not know him, but he is doing everything possible to gain fame.”

Kam asked Jabarin about the evidence, which supports his groundless claims. The Israeli journalist described Jabarin’s claims as part of Palestinian culture which promotes lies.

NRG website also published an article by Sara Cohen in which she attacked the Israeli army radio station for broadcasting poems by Palestinian poet Mahmoud Darwish.

She said, “Darwish’s war is the word and his narrative is the Palestinians. The problem lies when we adopt his narrative and mock the words that we do not understand.”

She warned against upholding art, culture, and diversity, which give right to expelling Jews through the use of knives and gunfire.