Army Kidnaps Two Palestinians In Nablus, Two In Jenin And One In Jerusalem 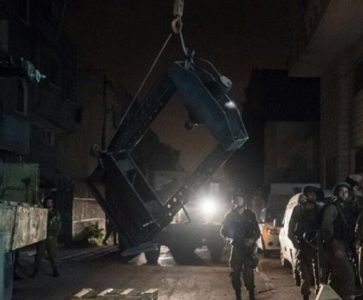 Israeli soldiers kidnapped, Monday, five Palestinians in the West Bank districts of Nablus, Jenin, and Jerusalem, and claimed to locate gas bombs, homemade guns, magazines and a workshop for manufacturing weapons. At least 29 Palestinians were kidnapped from various parts of the occupied West Bank.

The army said it found gas bombs, two magazines, and a homemade pistol during searches in Barta‚Äôa town, in the northern West Bank district of Jenin.

In addition, the soldiers invaded the northern West Bank district of Nablus and kidnapped two Palestinians, identified as Mahyoub Qanaze‚Äô, and the chief of security of the Najah National University in Nablus, Tal‚Äôat Sayel.

Also on Tuesday, the army Kidnapped 16 Palestinians In Doura, 3 in Sa‚Äôir and 1 In Surif, In the Hebron District, in the southern part of the West Bank.

In related news, undercover Israeli soldiers infiltrated into the Deheishe refugee camp, south of the West Bank city of Bethlehem, shot and injured three Palestinians, kidnapped two others, and two in Teqoua‚Äô town.

The Israeli army said 21 of the kidnapped Palestinians are involved in hurling stones, empty bottles and Molotov cocktails on military vehicles.

« Army Kidnaps 16 Palestinians In Doura, 3 in Sa’ir and 1 In Surif, In The Hebron District Football In Ireland for Gaza Youth »

B’Tselem: “If You Build It, They Will Come”