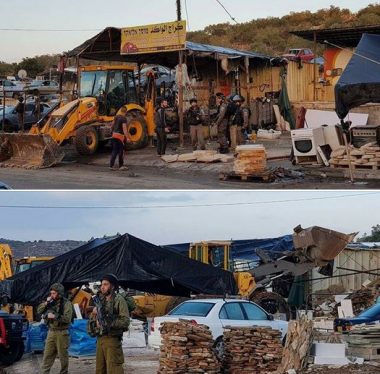 On Tuesday, several Israeli army jeeps, and bulldozers, invaded Barta’a town, south of the northern West Bank city of Jenin, and demolished four sheds, and a car repair facility, allegedly for being built out of the town’s zoning area.

Media sources in Jenin said the demolished the sheds are owned by Tha’er Jaradat, Mustafa Saba’na and Khaled Waked, while the car repair facility is jointly owned by Mohammad Omar Kabaha and Hasan Ahmad Kabaha.

The Israeli military said the demolished buildings did not receive permits from the “Civil Administration Office, which runs the military occupation in the occupied West Bank, and that they are located “outside the town’s zoning area.”

The village is isolated by the Annexation Wall, while the military controls its only gate and frequently closes it, or delays traffic, forcing the Palestinians to wait, in many cases, for hours just to be allowed to pass.