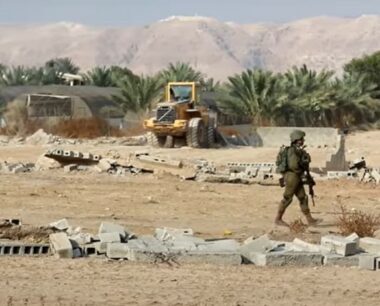 On Monday, Israeli soldiers demolished a Palestinian home and walls and bulldozed Palestinian lands east of Jericho in the northeastern West bank.

Mohammad Abu Gharouf, a Palestinian official in charge of monitoring the illegal Israeli colonialist activities in the Jerico and the Northern Plans governorate, said many army vehicles invaded the Al-Matar area, east of the city after surrounding it.

He added that the soldiers demolished a 200 square/meter home and four surrounding walls and uprooted Palestinian lands in the same area.

The army claimed the structures were built without a permit from the “Civil Administration Office,” the administrative branch of Israel’s illegal occupation of the West Bank, although they were licensed by the governorate.

Also, the soldiers demolished a Palestinian home in Ein Qibya village, west of Ramallah, in the central part of the occupied West Bank.