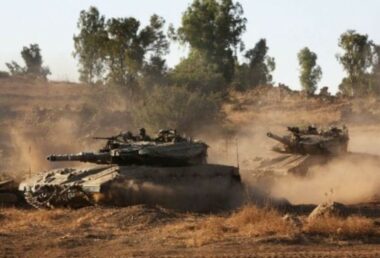 On Monday, several Israeli military vehicles, including bulldozers, invaded Palestinian farmlands in the Central District of the besieged Gaza Strip, and bulldozed them. The soldiers also abducted a Palestinian crossing the Erez Terminal in northern Gaza.

Media sources said more than ten armored Israeli vehicles, including bulldozers, invaded and bulldozed the Palestinian lands near the perimeter fence east of the Al-Boreij refugee camp in central Gaza.

The soldiers also destroyed other property, including agricultural sheds, during the invasion of the area.

Furthermore, the soldiers abducted a Palestinian man while crossing the Erez (Beit Hanoun) Terminal and took him to an unknown destination.

The Palestinian, the fifth to be abducted at the Erez Terminal this year despite obtaining permits, has been identified as Mohammad Abdul-Karim Abu Namous, 32.