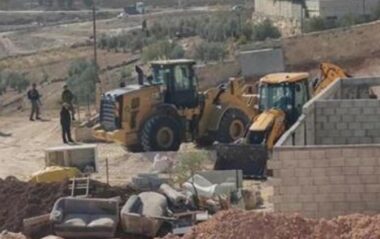 Israeli soldiers demolished, Tuesday, a Palestinian home and a water well, in addition to bulldozing 105 Dunams of Palestinian-owned lands, in several parts of the southern West Bank governorate of Hebron.

Local sources said several army jeeps and bulldozers invaded the Abu Khataba area, in the southern part of Hebron city, before demolishing a 60 cubic meters home consisting of three bedrooms, in addition to a kitchen and bathrooms.

They added that a local man, Adel Ismael Abu Turki, inhabited the demolished home along with twelve family members.

The soldiers also bulldozed the land around the property and demolished several walls.

In addition, the soldiers invaded Um al-Kheir village in Masafer Yatta, south of Hebron, and bulldozed 60 Dunams of farmlands owned by a local family.

The soldiers also bulldozed 40 Dunams of farmlands in the Zweidein Bedouin community which is part of the al-Ka’abna Village Council and Um ad-Daraj in Masafer Yatta.

The lands are owned by members of Zweidein and al-Basayta families, near the illegal Karmiel colony which was built on stolen Palestinian lands.

The soldiers also bulldozed five dunams of farmlands, owned by the local Shalalda family, in the Sarrara area in the Shiokh town, northeast of Hebron. The lands are close to the illegal Asfar colony, built on stolen Palestinian lands.

All of Israel’s colonies in the occupied West Bank, including those in and around occupied East Jerusalem, are illegal under International Law, the Fourth Geneva Convention, and all related United Nations and Security Council resolutions.